As a professional in the field of Applied Behavior Analysis (ABA), it’s crucial to have a strong understanding of the terminology and concepts used. But for those who are Deaf or hard of hearing, understanding ABA can be even more challenging, as the specialized terminology may not have an equivalent in American Sign Language (ASL).

That was certainly the case for me. When I first learned about ABA, the vocabulary was difficult for me because it didn’t translate easily into ASL. This made it difficult for my interpreters as well because they couldn’t fully understand everything being said without knowing these new words themselves. Over the years, I’ve worked to come up with signs in ASL that translates ABA vocabulary with conceptual accuracy. Part of this project has been creating my own video dictionary, which you can access here. I have also been posting a number of these on social media (for free!) and I’ll include some select signs here. 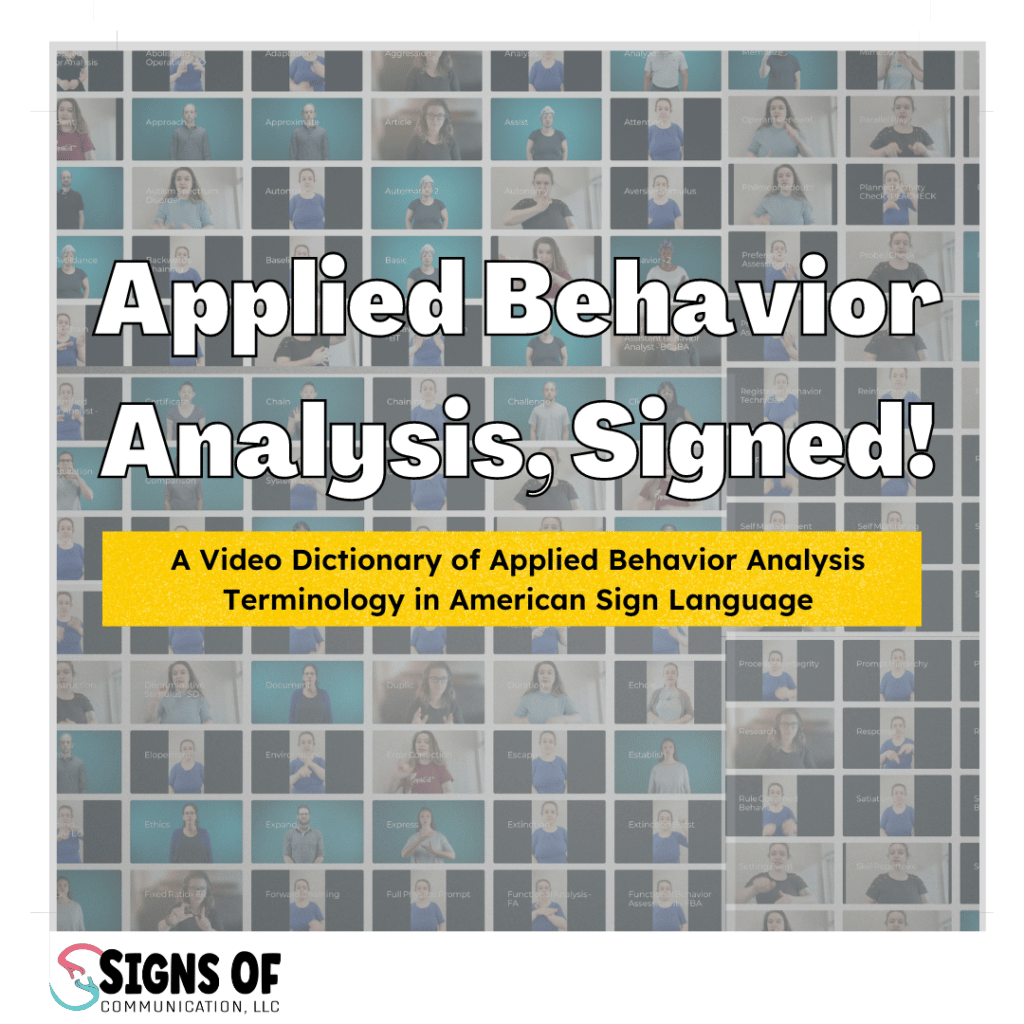 Applied Behavior Analysis (ABA) is the science of learning and behavior. It is a systematic approach to understanding and changing behavior. The philosophy of ABA is to identify environmental factors that influence behavior, and to change those factors. ABA practitioners work with individuals of all ages to address a variety of issues, including developmental disabilities, autism spectrum disorders, cognitive disabilities, and behavioral issues. ABA is also used in businesses and organizations to improve employee productivity and customer satisfaction.

There are no “new” signs here– simply sign “Applied”, “Behavior” and “Analysis”. You can also fingerspell “ABA” to represent this concept.

Verbal Behavior is a term which is often confused. It does not mean vocal behavior — instead, it means behavior which can work through other people. It includes behavior from someone who is communicating through sign, vocal, written or gestural ways. For example, I could get up and turn on the lamp. Or I could ask you to turn on the lamp for me. The end result to the environment is the same — the lamp was turned on!

Many people use the sign voicing or vocal for this word, but that is incorrect. Vocal behavior, such as a sneeze, may make a sound but it does not express any communicative intent. I used to sign it as “expressive”– but this is missing a bit of the meaning too. Verbal behavior can be expressive or receptive. What matters is the impact towards the environment and that there is a communicator. Therefore the sign for Verbal Behavior is a compound of expression, impact and environment.

Punishment means that the consequence that immediately followed a behavior makes it less likely that the behavior will occur again in the future. Punishment is the opposite of reinforcement. It does NOT mean discipline or that someone is in trouble, just that the behavior will decrease as a result. Positive punishment is when something is added to the environment which makes it less likely to happen again. Negative punishment is when something is removed from the environment which makes it happen less often in the future. For example, if you say something mean and people don’t want to talk to you, that is negative punishment.

The sign for Punishment is a compound of the signs Behavior and Suppress / Lower. This was chosen because punishment occurs when something suppresses or lowers the likelihood of that behavior happening again in the future. You can also see how the sign moves in an downward movement to represent the decrease in behavior. Positive and negative punishment do not mean they are “good” or “bad”– simply, is something added or removed? Positive punishment, then adds the sign “include” / “add” to show that something has been added to the situation (therefore making it POSITIVE). Negative punishment uses the sign “subtract” to demonstrate that something has been taken away.

This is also called the “3-term contingency” and commonly found on an “ABC Chart”. The antecedent is what happened immediately before the behavior of interest. We sign it as before or prior because it happens right before the behavior of interest. Behavior refers to whatever specific action or event is being looked at — although behavior can be covert (observable only to the person engaging in it, like thinking), we are usually looking at behavior which is observable and measurable. Although the sign doesn’t change, you may want to sign it in a smaller space when signing “Antecedent, Behavior, Consequence” right after each other. Finally, Consequence refers to what happens immediately after the behavior of interest. We sign this with the ‘C’ handshape moving forward in space to indicate that it happens after the behavior.

DISCLOSURE: This page may contain affiliate links. If you choose to purchase after clicking a link, we may receive a small commission from Amazon or other retailers. There's no extra cost for you!